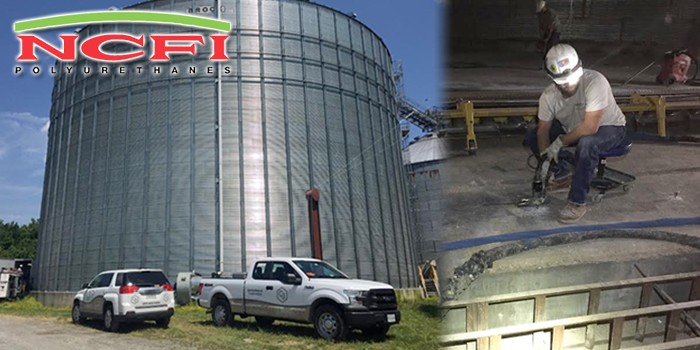 MOUNT AIRY, NC – July 20, 2016 – Soil consolidation and settlement happens. It's a fact of farm life. Secondary consolidation slowly forces water out of the spaces between soil particles. As this happens, soil particles move close together and settling occurs. Floors drop and become uneven. Newer grain silos and bins are using concrete floors instead of metal, and as secondary consolidation occurs beneath them, depressed or "settled" areas, form within the bin. Grain accumulates in the depressed areas, but cannot be retrieved by the bin sweeper. In fact, the sweeper, a kind of auger that transports grain up from the floor, can become damaged from prolonged exposure to the uneven floor.

This is exactly what Kirk Roberts of CJGeo, a Williamsburg, Virginia-based commercial foundation repair and geotechnical contractor, found when he got the job to repair the foundation of a massive 106-foot diameter grain bin at a poultry processing facility on the Eastern Shore of Maryland. "Once they removed the hundreds of thousands of bushels of grain, we found the floor had dropped some three inches in one section of the bin leaving a large pocket of grain out of reach of the bin sweeper." 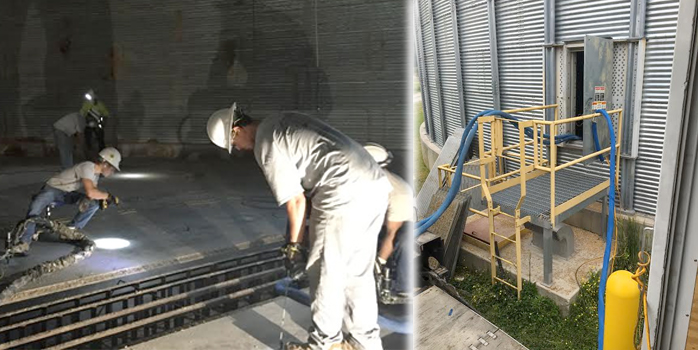 Roberts says CJGeo decided to use a newer void filling and concrete lifting technology called geotechnical polyurethane foam to solve the problem. "A concrete foundation is a concrete foundation," says Roberts. "We use this geotechnical poly foam technology to repair warehouse foundations, apartment complexes, and concrete slab highways. Why not on a grain bin?" Roberts says his company uses a product called TerraThane by the US company, NCFI Polyurethanes. "They invented geotechnical poly foam and have perfected it, so we trust them. TerraThane is so simple, clean, and easy to use. The old way would require us, or someone, to jackhammer up and rip out the concrete foundation then re-pour the damaged section. That would take heavy equipment, months of very dirty work, cost a small fortune, and be exceedingly difficult as the two doors are six feet off the ground and only 8 square feet." Roberts adds that the degree of difficulty was also high because it wasn't just a typical solid four-inch thick slab. "There were lots of ventilation ducts and troughs to work around, so it took some delicate work to keep them in tact. That would have been near impossible using the old method of replacing the concrete section.

"With TerraThane Geotechnical Polyurethane Foam, we drilled some small, unobtrusive 5/8th inch holes then pumped in 5,000-6,000 pounds of TerraThane until the void was filled and the concrete lifted to a level position. We then capped the holes, did a bit of light cleaning up, and were out of there."

According to Roberts the work took only two days and they refilled the grain bin on day three. "Saving time is the same as saving money. In this case, we saved the processor money by using TerraThane instead of concrete replacement, and more money by getting the job completed in only two days. TerraThane is ideal for repairing the concrete foundations of grain bins and silos."